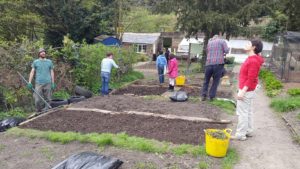 Induction day in April, after starting their plot design everyone was keen to get their hands dirty clearing their plots

Our Learner Plot groups have been busy planning, sowing and now planting out their gardens since their induction day on 1st April.  This year we were successful with funding from the National Lottery to recruit community groups with potential for then setting up their own growing spaces to take part in the scheme.  Crown Lane Primary School, Mencap, Spires, Streatham Drop-In Centre for Refugees, Albert Carr Estate residents and Streatham Library User Groups are the groups this year, sharing with a couple of local residents.

It’s been  great to see the plots transforming and the enthusiasm of the new gardeners. Crown Lane pupils come down twice a week rain or shine, and have been planting out the tomatoes and peas they sowed at school, coinciding with their science project about biology. They are very keen on digging and watering! Watch out for the pupils gardening blog coming soon… 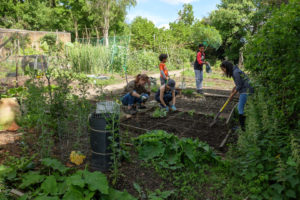 Planting out in May 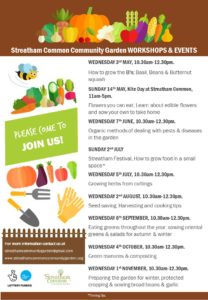 All are welcome at our monthly Wednesday workshops which are support sessions to our Learner Plot groups but open to all.  The garden’s open garden volunteering sessions still run 12-4pm on Wednesdays and Sundays so these are an additional opportunity to get involved courtesy of our National Lottery funding this year.

The garden will be running special activities as part of Kite Day on 14th May, and Streatham Festival on 2nd July which are listed above. 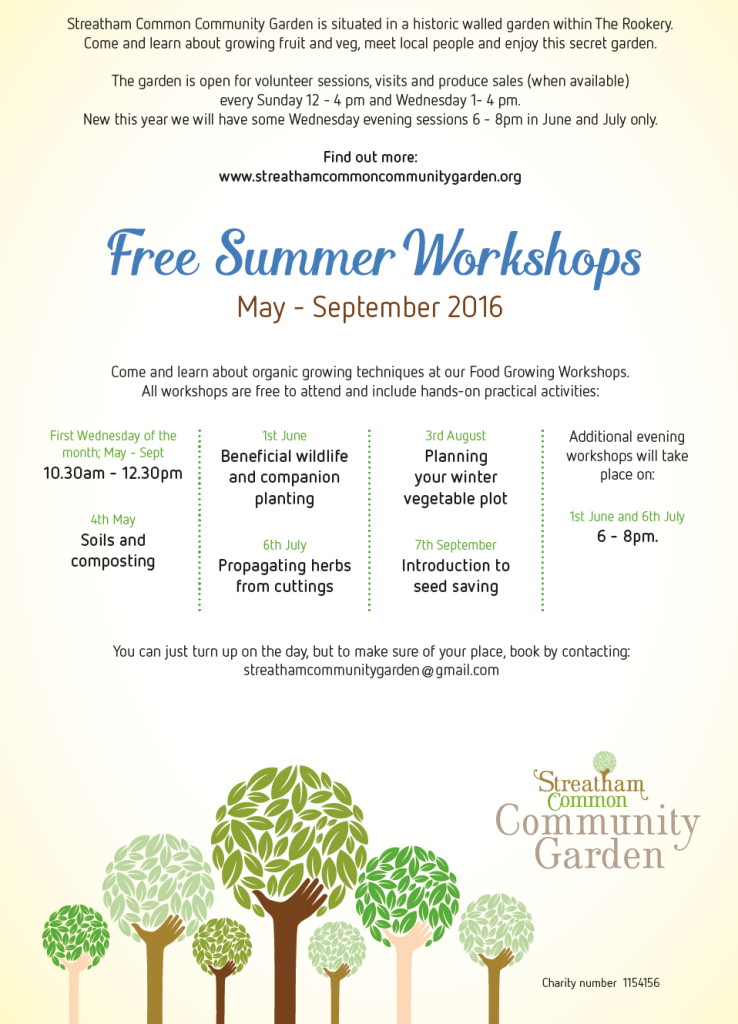 For more info, go to: http://streathamcommoncommunitygarden.org/education/

Bless the orchard with the cider produced at this year’s Apple Day,. We will see the return of the musicians who were  so popular last year, leading the communal singing.  We will be blessing the orchard with cider from October’s Apple day using a special Wassailing cup – made by Peter Noy, one of our trustee, s from wood form an old tree removed from the orchard prior to planting new trees.  Flyer

The business to be conducted will be

Elections
This year 2 trustees are required to stand for re-election :
John Rhodes and Kasia Brookes
Nominations will also be taken from any members wishing to become trustees.

Any Other Competent business

Only members are entitled to vote, membership will be due for renewal shortly after the meeting.  Membership forms available here

After the meeting Charlotte Dove our Community Gardener in 2015 will talk about her Seed Saving trip to America.

Next open garden session after Wassailing  – 24th January. We will not be open on Wednesdays in January.